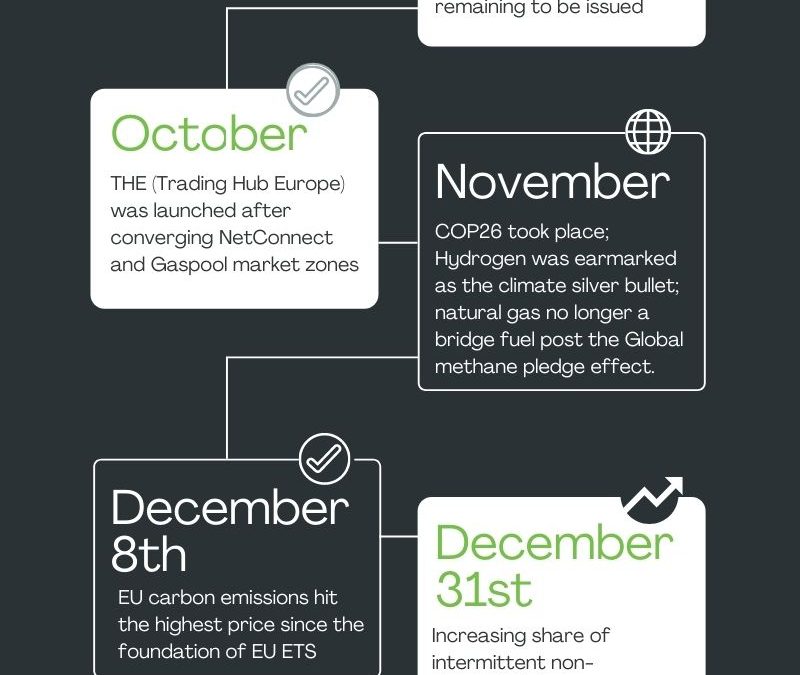 The EU energy transition created situations of deadweight, and this could not be any truer in 2021. The transition was initially triggered by the vulnerability of the RES in the EU primary energy sources. Мeanwhile the gas supplies were disrupted and the storage levels were critically low at the beginning of the cold season. The natural gas price skyrocketed and caused spill-over effects on electricity. Interestingly, no other key energy commodities underwent the same stress. The crude oil price, on the other hand, did not follow the same price momentum.

Тhe energy sector, and more noticeably the gas sector in 2021, were marked by a recovering demand, but still a low output with tighter-than-expected production. It turned out that demand recuperated faster than supply. Producers who were experiencing downturns could hardly catch up amid the largest EU price jumps in decades. The anticipated COP26 came to a close, making its mark through the Global Methane pledge and determination for fossil fuels abatement, although all this ended up with a phase-down rather than a phase-out.

>> Jul 2021 — The European Commission released the largest Climate law package Fit for 55 on its ambitious way towards GHG emission reduction. Тhe maritime sector would be included in the scope of EU ETS scope from 2023 onwards.

>> Sep 10th — The $11 billion Nord Stream 2 saga was near an end. EPC was finalized with just an admission certification remaining to be issued.

>> Oct 1st — Consolidation of the largest gas market in Europe, Germany, under the THE (Trading Hub Europe), after converging NetConnect and Gaspool market zones.

>> Based on the TTF historical data, the natural gas average close price, used as a standard benchmark price for performance, was around 46.16€/MW throughout the year 2021, as opposed to 10.46€/MW throughout 2020. The price briefly jumped to 180.27 €/MW in December. Compared to the highest corresponding cost of 21.70 €/MW in 2020, the new one accounted for a nine-fold increase.

>> Oct — Nov — COP26 took place. Hydrogen was officially earmarked as the climate silver bullet for decarbonization and was promoted as such.

>> Gas prices in the EU followed a W-shaped recovery (double-dip recession). This can be attributed to the COVID-19 waves and in Q2 2021 it retained the price level from Q3–2018 at 25€/MW. Despite its expansion and price momentum stemming from the supply shortage and recalling the Beast-from-the-East-scenario, gas is not a true proxy for the economy. The steep and rapid surge in the second half of 2021 was an impulse rather than an accurate representation of the economic growth.

>> Dec 8th — EU Carbon emissions hit the highest price since the foundation of EU ETS— 89.47 €/t as opposed to 33.55 €/t at the corresponding time the previous year, which marks a triple jump on a YOY basis.

>> Dec 31st — As a consequence of the EU primary energy sources strategy, there was an increasing share of intermittent non-dispatchable energy sources. This led to decreasing conventional flexibility with the Nuclear plants decommissioning. The last German nuclear capacities will be phased out at the end of 2022. After abating nuclear energy, the coal plants will remain in function until 2038.

>> Dec — The tightness in the gas supply had a detrimental effect on the clean spark spreads and resulted in ramping up the electricity wholesale prices. It further aggravated the high price by including the carbon-intensive coal electricity and pricey carbon emission allowances, thus breaking a record, hovering around 400€/MW in the EU

>> Q4 of 2021 — The price differential between natural gas and crude oil got larger. Widened inter-commodity spread could boost oil demand. By convention, the natural gas commodity is priced below crude oil. Regarding the inter-commodity spread (Brent; TTF) in 2021, the two price curves intersected at the end of Q3 202, when natural gas reached $100/bl, while Brent anchored at $71.59/bl. This represents a price anomaly. In Q4 2021 this deviation gets even more pronounced with TTF following its upward trend and crude oil (Brent) tending to decrease. We can conclude that at the end of 2021, natural gas was more expensive than crude oil, which may incent consumers to switch to oil alternatives.

>> 2021 — Coal-fired electricity was set to rise. The increased electricity demand resulted in coal-fired electricity generation growth and an all-time peak of 6% in 2021. This was another example of why electrification must not be performed before fully developing the RES. Lack of sufficient base-load energy sources and decommissioning the existing ones, such as nuclear plants, appears to be the right recipe for the comeback of coal.

2021 will be remembered with the largest global electricity demand and by the predominant use of gas and coal plants, along with the largest progress coal-fired power has seen recently. The key role of natural gas for the EU gross electricity production triggered a domino effect of surging wholesale prices for electricity. The prices were exacerbated by the coal-firing power plants and carbon emission allowances.

The year reaffirmed the main LNG arbitrage route, bringing the imports into a tug-of-war situation between the Pacific and Europe with a strong positive linear relationship, at a correlation of 0.93. With South America recently included, the EU would have to deal with the challenge to lure more LNG supplies, unless it comes up with a long-term solution.